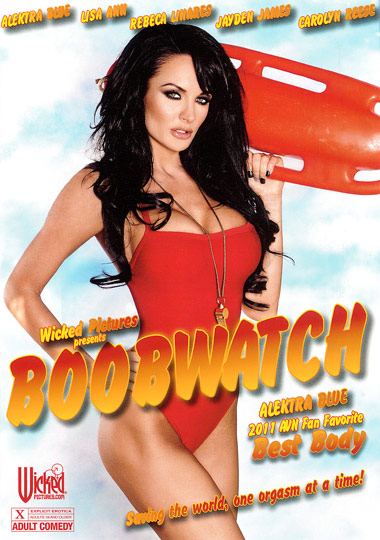 You don’t need to have seen “Baywatch” to like “Boobwatch,” so if you’re too young to have witnessed those famous red bathing suits barely holding in the bouncing titties of hotties including Pamela Anderson, don’t worry. This Wicked Pictures parody gives you the stuff they couldn’t show on primetime TV. Beautiful Alektra Blue leads a team of “highly skilled and extremely busty lifeguards” who resuscitate your dick.

Alektra discovers Danny Mountain and Rebeca Linares grilling hot dogs in their back yard. Danny protests that they’re nowhere near a beach, so why do they need a lifeguard? Without missing a beat, she makes clear her intention to service the not-so-weenie weenie in Danny’s pants with Rebeca’s help. Alektra and Rebeca play together very nicely as well. If you haven’t seen Rebeca in a while, just wait till you ogle the sultry Spaniard’s enhanced tits. Even better, she’s so excitable getting fucked with Alektra sitting on her face. After satisfying both brunette babes in different positions, Danny leaves their big tits juicy with his liquid DNA and they rub them together as the scene ends.

Tommy Gunn is telling Dane Cross about his lifeguard encounter while Dane washes his car. They’re hundreds of miles from the beach, so Dane’s disbelief is understandable. He soon finds out the truth when natural-bodied blonde Carolyn Reese shows up to protect them from the “imminent danger” of Dane’s garden hose. She finds much more use in the hoses they keep in their pants, first sucking their cocks one after another, then filling herself up with them at both ends. Carolyn especially seems to get off on Dane.

For the last scene, Alektra surprises a sunbathing Chris Johnson by his pool. It doesn’t matter that he wasn’t going in the water, because Alektra easily convinces him he needs a lifeguard by giving him a kiss so hot it stiffens his dick, and then sucking it down. Alektra gets hers when Chris eats her out and fingers her at the same time. There’s more foreplay in this scene than in the others. When they start to fuck in reverse cowgirl, Alektra shows off some hot hip-swiveling moves, but even in missionary Alektra is an active fucker who makes sure she gets to cum. When Chris unloads on her tits, Alektra again massages the cream into her skin. Maybe it’s her secret for keeping away the wrinkles you get from being in the sun all day. What a way to end on a high note!

“Boobwatch” is one of the funniest parodies in a while. The intentional overacting, the slow-motion running, and the ridiculousness of a clairvoyant lifeguard sending her team out to save men on dry land are used to great effect. Bless those tight red one-pieces!