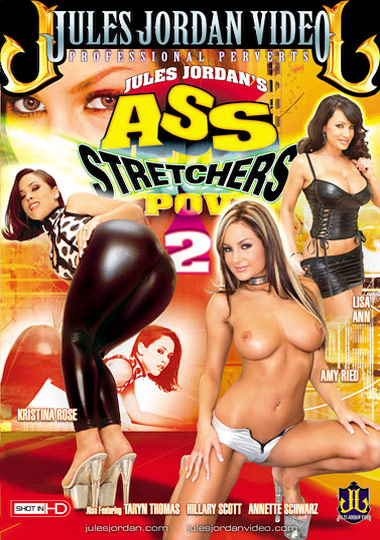 Six dirty girls, each wanting to be stretched wide in the behind for your personal viewing pleasure, make “Ass Stretchers POV 2” a filthy good time. Jules Jordan directs and performs two scenes in what stands as a great new installment of this series. It’s been two years since #1. Let’s hope we don’t have to wait so long for #3.

German hottie Annette Schwarz teases Phil Yorgash with her Teutonic T&A. This tall drink of pilsner gives wet, sloppy head with zero gag reflex and bottomless saliva glands. They fuck, starting in her pussy. Annette tastes her juices off Phil’s cock and mounts him in reverse cowgirl. Soon, the urge for butt-sex is too great to resist. She lowers herself carefully at first, but soon she’s bouncing, taking it out to taste her ass on it, and hopping on for more. In the end, Annette gets a facial and uses his cock to scoop it into her mouth. She spits some out and snorts it up her nose nonchalantly. Cum snorting – that’s how to get nasty!

Amy Ried, another German import, wants Phil to play with her titties. He also gives her some head, which gets her worked up to suck him off and give him a titty fuck before the main event. This scene is full of visuals that will get you rock-hard, like her waist-to-ass ratio when he enters her in doggy, her bouncing boobies, close-ups of his veiny dick sliding into her ass, and a big facial.

If you like watching a thick one spreading a girl’s back door open, Jules Jordan is one of the best companies in that area. With girls this exciting, the result is as good as it can get.